After two days of racing off the Sydney Heads, Lang Walker's Kokomo (CYCA) was declared the winner of the Farr 40 CYCA Regatta. Seven boats raced the six-race series with Kokomo named the eventual winner of the third regatta in the Australian Farr 40 2007/8 circuit.

Racing on Saturday was a wet affair as the fleet sailed in a southerly breeze that reached 18 knots. The typical lumpy seaway off Sydney Heads made for a hard day of sailing over four races. Kokomo, steered by long-time crew member Mark Walsh, won the first race of the series.

Both Kokomo and Matt Allen’s Ichi Ban (CYCA) had two wins for the series with Ichi Ban taking the wins in races two and six and Kokomo in races one and four. “There were plenty of opportunities to make gains and losses out there. It was great to have Beasho weave his magic and to have Mark helm for us this weekend,” commented Kokomo's mainsheet trimmer Richard Allanson.

Race three of the series went to the New Zealand team of Brett Neill’s White Cloud. Neill and his team travel across the Tasman to join the Australian fleet for each regatta on the Australian schedule.

Day two and the threatening dark skies cleared into a ideal spring day with the building westerly breeze flattening the seas from Saturday. The breeze reached 23 knots as the fleet sailed the last two races of the regatta.

Kokomo again took the Boat of the Day award with two second places while Ichi Ban improved on their day one finishing places and as a result moved up the leader board to finish third overall.“I now appreciate how hard it is for these guys (Farr 40 owners) the get these boats around the track. It’s hard work and takes a lot of concentration,” remarked Walsh after racing.

Lisa and Martin Hill’s Estate Master, which made its Farr 40 debut 12 months ago, took the gun for race five of the series and they finished in second place overall.

“It’s 12 months since we joined the class and we are really happy with where we are. We are knocking on the door and we’ve managed to finish in the top three for the first three events this season,” said Hill.

The Farr 40 class would like to thank the CYCA for hosting this event. The next event on the Australian Farr 40 schedule is the Savills SORC Regatta, hosted by Middle Harbour Yacht Club on November 24-25. - Sam Crichton 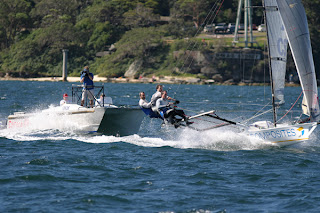 (Photo By Brad Maylon www.frothers.com.au)
Chris Dixon, Greg Dixon and Justin Healey were clearly the masters of the 15-18knot westerly wind on SydneyHarbour today when they brought their skiff CST Composites home an easy winner of the Mick Scully Trophy race.

The trio grabbed the lead on the second windward leg of the course to record a 4mins 1sec win over Kinder Caring Home Nursing, skippered by Brett Van Munster.

The tough conditions saw six of the 22 starters fail to complete the course.

A mad scramble at the start saw near collisions and capsizes abound, while John Winning and his Ssangyong Yandoo team were brilliant to take the lead at the pin end of the line.

On the first windward leg Macquarie Real Estate took the lead but as the 3-buoys handicap system came into play it was Maytag which headed the pack on the downwind leg.

Last week’s winner Asko Appliances (Hugh Stodart) was forced out with gear failure on this run while Maytag surrendered her lead with a capsize.

On the second windward leg, Macquarie led from CST but CST’s crew were superb as they regained the #1 position over Macquarie at the 3-buoys marks.

The battle for third placing was now ‘hotting up’ with Kinder Caring, Pure Blonde, Ssangyong Yandoo and Keith Piggin all in contention.

CST totally dominated the next spinnaker run to open up her race winning margin and the spectator interest was now totally focused on the race for minor placings.

As the wind fluctuated in strength and direction, at times, the positions changed several times on the final windward leg which set up a great spinnaker finish.

Frank Quealey
Australian 18 Footers League
Posted by the editor at 10:21 pm No comments: