A thick "pea soup" engulfed the fleet during the in port racing in Boston. 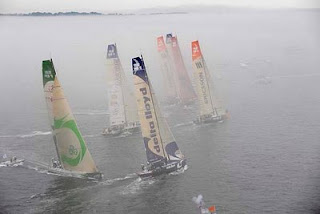 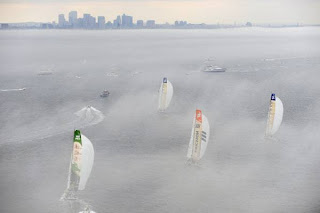 Posted by the editor at 7:06 am No comments: 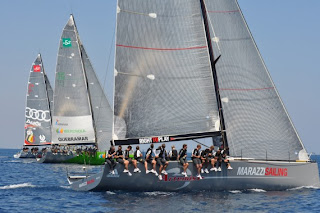 Star campaigner Marazzi, who finished fifth in 2008 in Qingdao and fourth in Athens and is looking ahead to 2012 the Olympic regatta at Weymouth and Portland, England has formed the Audi MedCup Circuit’s first Swiss team, sailing under the flag of the Gstaad Yacht Club, forming the biggest Swiss sailing project since America’s Cup winning Alinghi.

Since taking on the boat the team have managed to complete six days of intensive training off Valencia prior to final training before the first Audi MedCup Circuit event, the City of Alicante Trophy regatta starts next week.

Jochen Schuemann, who won the America's Cup twice with Alinghi, said: “During the last couple of months we have worked very hard to get this young and ambitious project under way. I’m very happy to help Flavio Marazzi to establish a new Pro Team and to share my experience in sailing and in managing a sailing team. MARAZZISAILING combines the experience and professionalism of established America's Cup sailors with the “freshness” of Olympic talents. I’m very much looking forward to participating again in the Champion’s League of Sailing.”

Private individuals are backing this new Swiss TP52 project from the Gstaad Yacht Club. The team’s ambitious objective is to generate further interest and backing from this first event with a top finishing place as the catalyst to secure the future participation of the highly motivated Swiss team through additional partners and sponsors.

Flavio Marazzi commented: “I’m very proud to sail the Audi MedCup together with Sailing Legends like Jochen Schümann and John Cutler. For me the MarazziSailing TP52 Project is an important step on my way to the Olympic Games 2012. As a Star boat sailor sailing within a team of 14 people is a real new challenge and I am convinced that our team will show a good performance in Alicante already.”

RIGHT TO PLAY is the social partner of the MarazziSailing team. It is an international humanitarian organisation, which uses games and sports programmes around the world to help children suffering from war, poverty and illnesses, in order to promote their health and education and to improve their quality of life in a sustainable way.

Flavio Marazzi, who has children, has been an ambassador of RIGHT TO PLAY for several years.

Posted by the editor at 7:05 am No comments:

The 2009 Melges 32 North American Championship hosted by the SAUSALITO YACHT CLUB (SYC) on September 6-8 will deliver three great days of awesome racing. The Notice of Race (NOR) has officially been released and online registration is open.

VISIT THE OFFICIAL WEBSITE OF THE 2009 MELGES 32 NORTH AMERICAN CHAMPIONSHIP
Posted by the editor at 7:00 am No comments:

Email ThisBlogThis!Share to TwitterShare to FacebookShare to Pinterest
Labels: Melges 32

Only seven more sleeps until the first regatta of the 2009 Audi MedCup Circuit in Alicante , Spain. 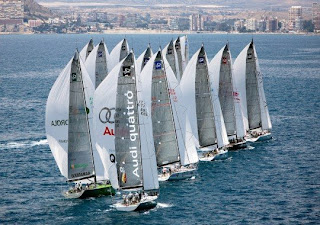 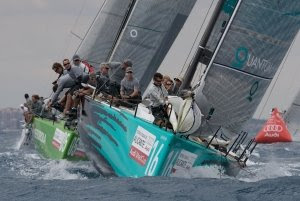 © Th Martinez/AUDI MEDCUP.
Audi MedCup
Posted by the editor at 6:33 am No comments: 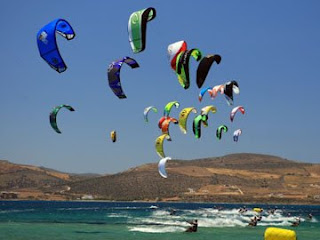 The International Sailing Federation (ISAF) has announced today that the Experimental Kiteboarding Competition Rules have been released and published on the ISAF website.

The Appendix BB -- Experimental Kiteboarding Competition Rules have been published to provide a consistent global framework for kiteboarding competition. The Experimental Rules were produced by members of the ISAF Racing Rules Committee and ISAF Windsurfing Committee in collaboration with a group of kiteboarding enthusiasts in Europe and the USA.

These Kiteboarding Competition Rules are called “experimental” because they will be revised from time to time in response to feedback, comments and suggestions sent to ISAF by sailors, event organizers and judges who use them. Ultimately, it is expected that a revised version of Appendix BB will be put forward to be considered by the ISAF Racing Rules Committee and the ISAF Council for inclusion as a new appendix in a future edition of The Racing Rules of Sailing, the rules which govern the sport on the water worldwide.

Email ThisBlogThis!Share to TwitterShare to FacebookShare to Pinterest
Labels: Kiteboarding 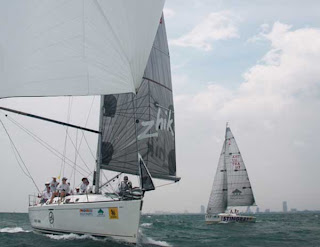 There was no stopping CYCA Commodore Matt Allen's Beneteau 44.7 Ichi Ban and his Aussie crew including wife Lisa Allen and Michael Spies. Five wins out of five races secured them the Racing Class title in the Top of The Gulf Ragatta and added further silverware to the trophy cabinet.

Racing continues in other classes today and you can follow the regatta here.
Posted by the editor at 6:12 am No comments:

Email ThisBlogThis!Share to TwitterShare to FacebookShare to Pinterest
Labels: IRC

Racing in the 2009 J24 World Championship starts today in Annapolis, Maryland. A fleet of 82 competitors from eighteen countries have gathered to fight it out for the prestigious title. The fleet includes five former J24 World Champions together with five North American champions; a four-time European champion; two South American and five US Midwinter Champions.

Looking through the entry list, I can only see one lone Aussie - Doug McGain sailing "Code Violation". Doug's an ex-laser sailor and we wish him the best of luck in this World Championship.

Follow the regatta here.
Posted by the editor at 5:54 am No comments: 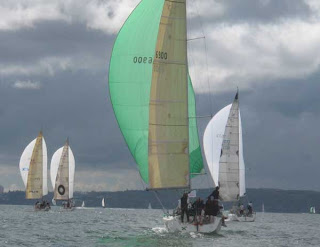 Outlaw, Calibre, X3 and Swish racing to the top mark during Race 1 Audi Winter Series 2009
photo credit: CYCA Staff
Race One of the 2009 Audi Winter Series was sailed today in 8-10 knots of south easterly breeze. Racing for the fleet of 125 yachts started on time with a full course being sailed.

For the full race report click here and full divisional results click here.
Posted by the editor at 5:58 am No comments:

The Tall Ships Atlantic Challenge '09 starts on Sunday, May 3rd in Vigo, Spain. The fleet will head south to Tenerife and then west to Bermuda for the country's 400th birthday celebration.

The Spirit of Bermuda is the only sail training vessel on this side of the pond. Sail training vessels from many other nations including Russia, France and Great Britain will be racing her to Bermuda and other vessels from North and South America will converge on Hamilton in the beginning of June to join the Tall Ships Festival and the country's Anniversary celebrations.

You can follow the Spirit during the first leg on www.WorldRegattas.com and www.tallshipsraces.com/atlanticchallenge.

Lynn Fitzpatrick
World Regattas
Posted by the editor at 5:20 am No comments:

Email ThisBlogThis!Share to TwitterShare to FacebookShare to Pinterest
Labels: Offshore 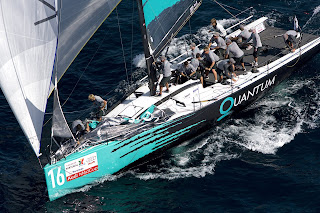 The same rigorous approach, regular attention to development and detail and the considered, careful strategies on the water, always with an eye to long term game are once again the key, core values for reigning Audi MedCup champions Quantum Racing as they embark on the challenge of becoming the first crew ever to successfully defend the MedCup TP52 title.

Quantum Racing's skipper-helm Terry Hutchinson and crew are already doing their utmost to unfold a programme which will give them the best possible chance of becoming the first team yet to win the Circuit two year in succession.

The full team have just completed 12 good days of training, tuning and testing off Valencia in preparation for the first regatta of the Audi MedCup season, and will log six more training days in Alicante before racing starts there on May 12th for the TP52 Series.

The hull shape and keel of the Botin Carkeek designed Quantum Racing remain unchanged on last year, other than small refinements and some structural improvements.

Their main strategy has been to continue to get more speed from the 'aero package' - the rig and sails.

We have sailed for twelve days now in Valencia and it was all good", US Sailor of the Year Hutchinson reports this week. "I think I made a comment to someone that it is nerve racking because everything is going so smoothly, and so you kind of wonder what is out there that we are missing, but we have an extra 14 months with the boat under our belts as we start this season, and that makes a big difference."

"We sailed four days with the Spanish team, doing practice races and all, and that was really, really good. We did not change the boat at all, not any hull modifications. We did do some structural stuff, and upgraded the hydraulics and a lot of little things.”

The Quantum Racing team's immediate goal is to leverage maximum advantage from their accumulated knowledge of their proven, winning boat in the early part of the season:

"Everything we have seen in pictures of the new boats is what you'd expect them to be." Says Hutchinson, "At this early time in the season while they are still figuring out their boats it is going to be pretty even racing, but as the season wears on you would expect the new boats to be better."

The only personnel changes to the triumphant Quantum Racing line up on the water is the loss of bowman Jeremy Lomas (back to his native Emirates Team New Zealand). He is replaced by Dave Tank (USA), while Robert Hopkins (USA) will fill in as navigator for Ian Moore (IRL) for the first three Audi MedCup regattas.

"It is always a little bit of a war of attrition. It is not necessarily the races that you win, but those that maybe you get round the top mark in 10th and then get a fifth from which are important. It is about keeping yourself in the hunt until the end of the series."

Hutchinson and the team were a formidable force in 2008 and all the signs are that they will be equally tough to beat on this 2009 Audi MedCup Circuit.

Audi MedCup
Posted by the editor at 8:15 pm No comments: 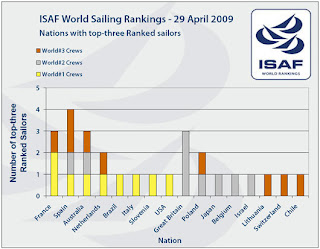 France hits the front in the national standings as there are two new leaders in the latest release of the ISAF World Sailing Rankings on 29 April 2009.
The French teams came to the fore on the final day of their home ISAF Sailing World Cup event, the Semaine Olympique Francaise in Hyeres. After a series of spectacular Medal Race performances from the home teams, France was propelled to the top of the leaderboard at Hyeres and has now hit the top of the national standings in the ISAF World Sailing Rankings, with two crews holding world #1 spots. The Spanish also continue their strong start to this Olympic quadrennial with four crews holding world top-three rankings.
Helping France to the top of the Rankings are 470 stars Ingrid PETITJEAN and Nadège DOUROUX (FRA), whose typically consistent fifth place finish at Hyeres moves them up to the top spot in the Women’s 470 Rankings. The other new leaders are the 49er team of Pietro SIBELLO and Gianfranco SIBELLO (ITA). After the heartbreak of a fourth place finish at Beijing, the Italian brothers have made a storming start to their 2009 season, winning both World Cup events at Palma and Hyeres to hit the top spot in the World Rankings.
The next release of the ISAF World Sailing Rankings will be on 3 June 2009 following on the Delta Lloyd Regatta, event five of the ISAF Sailing World Cup.
Visit the ISAF World Sailing Rankings homepage at www.sailing.org/rankings for more on the latest Ranking release and dates for all 2009 Ranking releases.
Posted by the editor at 7:12 am No comments: