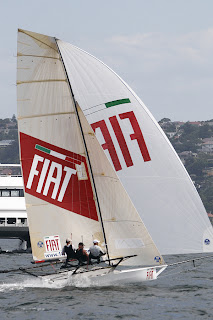 Note the mainsail head geometry on Fiat
Seve Jarvin, Sam Newton and Robert Bell tightened their grip on the Australian 18ft Skiff Championship with another impressive win in Gotta Love It 7 in Race 3 of the series on Sydney Harbour today.
Gotta Love It 7 took the lead soon after the start and was never headed over the north-east course to score a 25secs victory from Michael Coxon’s Fiat, with defending champion Macquarie Real Estate (Micah Lane) just 8secs further back in third place.
Adam Beashel’s Club Marine finished fourth, followed by Rag & Famish Hotel (John Harris) and Ssangyong Yandoo (John Winning).
With half the championship now completed Gotta Love It 7 holds a clear lead on 5 points, followed by Rag & Famish in second place on 10 points. Club Marine is third on 14 points.
Macquarie Real Estate holds fourth position on 15 points, Ssangyong Yandoo 17 and Omega Smeg (Trevor Barnabas) on 21.
Pure Blonde (James Francis) won the start but Gotta Love It 7 took over midway up the windward beat to the Beashel Buoy.
Jarvin and his team led by 30secs at the windward buoy with Fiat in second place, followed by Omega Smeg, Asko 2 (Ian Henderson), Macquarie Real Estate, Pure Blonde, Club Marine and Ssangyong Yandoo.
Gotta Love It 7 retained their lead on the downwind legs back to Double Bay but her margin had been halved by Fiat which was now only trailing by 15secs.
Macquarie Real estate gained two placings to move in to third ahead of Club Marine, Omega Smeg, Ssangyong Yandoo and Rag & Famish.
The ‘7’ crew covered Fiat on the next windward leg and regained her 30secs margin as the pair turned for the downwind leg down the middle of the course.
Macquarie gained to be just one boat length behind Fiat at that point.
From there to the finish Gotta Love It 7 had little difficulty in retaining a comfortable lead.
Former national champion Hugh Stodart (Asko Appliances) won race 1 of the series but every thing has been downhill since then.
Stodart and his team were sailing well in the lead in race 2 before having a spectacular capsize which saw them finish in sixth place.
Following that race they were disqualified after a protest.
Today was no better when they capsized soon after the start and had to battle hard to get back for a 9th placing – some four minutes behind the winners.
Races 4 and 5 of the championship will be sailed next weekend.
Race 4 will be sailed on Saturday (Australia Day) 26 January and Race 5 on Sunday 27 January.

Frank Quealey
Australian 18 Footers League
Posted by the editor at 7:51 pm No comments:

It’s been a weekend of extremes for the Sydney 38OD's sailing in the Docklands Invitational. This is the warm up regatta for next weekends Morris Finance Sydney 38OD National Championships being sailed as part of Skandia Geelong Week.

Yesterdays light air conditions saw two of the Sydney boats, Chris Way's Easy Tiger and Alan Brierty's Limit, battle it out at the top of the fleet with a clear speed advantage over the other eight boats.

Easy Tiger ultimately won the day but Limit was just a couple of points behind. The top Victorian boat was Lou Abrahams' Challenge who toughed it out in the first race but came back to be a consistent third at the end of the day.

Then it blew the dots of the I's today and Lou Abrahams crew, ably skippered by long time friend Carl Schmidt, showed their almost unmatched experience in heavy conditions with two bullets from two starts. Another Victorian also faired well - Ian Murray from Geelong, sailing Cinquante, had a great day posting two fourth places to draw on points with Sydneysiders Zen, sailed by Gordon Ketelbey and relegating them to fifth on a count back to hold fourth overall behind Challenge.

But despite the obvious skill of the Victorians in a blow, it wasn't enough to wrest the lead from Limit and Easy Tiger who battled it out for the top points all day. Chris Way decided to try a number four headsail instead of a three like the other competitors and paid the price in boat speed when the breeze went light from time to time. It was enough to let Limit take the ultimate honours for the Regatta with Easy Tiger second.

The top Corinthian boat (with no professional sailors on board) was Victorian Boat Sierra Chainsaw, skippered by Mel Mollison.

This was an excellent warm up event for the Nationals, with some Crews happy, and others going away to look at some boat speed issues, but all singing the praises of the organising team and the NSW boats especially complimentary of the Docklands setting and 'vibe' with so many Melbournians coming down to visit over the weekend.
Posted by the editor at 12:15 am No comments: 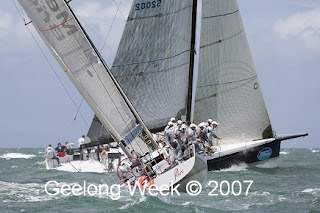 The annual invitation-only event gathered fourteen of Australia’s best performed yachts at Waterfront City Docklands to compete in five races for IRC handicap honours.
They may be novices when it comes to yacht racing in Melbourne but Kwok’s international crew which included team members of the BMW Oracle America’s Cup team, and Alinghi trimmer Craig Satterthwaite sailed the New Zealand-built Reichel Pugh 45 superbly on Port Philip during the two-day event to post a top three result in each race. Tactitian Gavin Brady attributed the win to making big gains downwind while working the boat well. “Yesterday was flat and light and we’re a light boat so it suited us and today it was really physical out there. We were catching waves and working the sails all the time so the boat performed fantastic” he said.

Meeting for the first time at Skandia Docklands Invitational were two TP52’s, Bob Steele’s Quest from NSW and Victorian skipper Alan Whiteley’s Cougar II. Two metres longer than Beau Geste, the sleek downwind racers revelled in the 20 knot winds, slicing through the moderate chop and showing plenty of style as they enjoyed their “race within a race”. The fifth and final race in particular proved to be a thrilling duel with Quest edging out Cougar II by six seconds to take line honours in both races on day 2 but Cougar II’s IRC rating served to secure her second place on handicap ahead of Quest.

After Saturday’s frustratingly light breezes, all skippers were hoping for some stiffer winds for the final days’ racing and while a fresh southerly provided ideal conditions for the cutting-edge Invitational fleet there were some casualties out on the course. The crew of Georgia had their hopes of making it into the top ten dashed when backstay problems forced them to withdraw from race four. A quick repair job saw her make the start of race two with minutes to spare.

Chris Dare’s new Corby IRC 49 Flirt II enjoyed a better days’ racing in the moderate chop but it was Michael Hiatt’s Cookson 50 Living Doll which sailed consistently well over both days to take fourth place behind Quest. In the battle of the mid 40-footers Philip Coombs’ DK46 Dekadence performed the best, taking fifth position on the ladder ahead of Flirt II, and Tony Kirby’s Patrice Six. Chutzpah, Bruce Taylor’s sharp-looking new Reichel Pugh 40 showed that she wasn’t quite as competitive around the buoys as she has proven to be in blue-water events. The record-breaking Sydney-Hobart division winner finished mid fleet in the Docklands Invitational, beating Extasea, Shogun, Goldfinger, Pretty Woman, Georgia and Isuzu Marine on handicap.

But it was the pretty little beamy boat with the red dragon on her topsides which captured everyone’s attention at Docklands and the famous yacht name Beau Geste will now be inscribed on the Docklands Invitational Perpetual Trophy. Kwok is renowned for selecting iconic sailing events around the globe to compete in and while he can now tick the Docklands Invitational off his list, the Beau Geste crew will focus on repeating their impressive performance during the upcoming Skandia Geelong Week.

Skandia Docklands Invitational is presented by Skandia, the Victorian State Government, the City of Melbourne, The Age and the organising authority Royal Geelong Yacht Club.

[Source: http://www.docklandsinvitational.com.au/index1.asp]
Posted by the editor at 12:07 am No comments: