Tough times in the Malakka Strait with extremely flukey conditions. I'm going to stick to the west coast at the moment and hope that with the next weather update the winds move into the north. This is also the closest angle to the next mark. Currently sailing at 135 TWA in 5.50knts of wind. I don't think the polars on the wiki are correct! 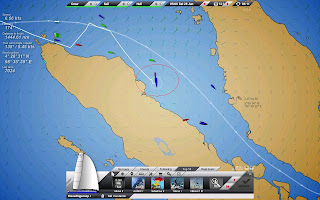 Posted by the editor at 9:58 am No comments:

The MOD70 European Tour has been announced today and is set to be a huge hit on the European stage. Let's hope they have a media team to take up the challenge of creating some fantastic online content as we have  seen with the America's Cup World Series and Volvo Ocean Race. 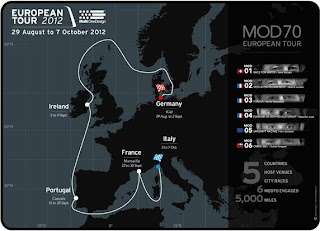 
KEY WEST, FL—Following a series of meetings held during Quantum Key West Race Week, members of the TP52 class are pleased to announce its plans for grand prix racing in 2012 and beyond.

Rob Weiland, TP52 Class Manager, says the class is forming a management group owned and controlled by members that will be responsible for event management, event marketing, sponsor and media coordination as well as recruiting new teams to join 52 racing.

“There is strong support and enthusiasm for this structure, not only among owners, but also potential sponsors who have been part of the discussions. TP52 racing will continue in 2012 and beyond at the same high-caliber level as in previous years,” says Weiland. “With class ownership and control, we expect to establish a strong, stable racing program that will continue to expand and excel.”

This year, the class will be racing in a circuit with consistent race management including on-the-water umpiring. The circuit winner will be the best-performing boat in five qualifying events. The regatta schedule will include:

Weiland says IRC 52 and Soto 40 teams are invited to join in the racing. “We’d like to increase the participation, which not only makes for more exciting competition, but will also provide a chance to race for the Sardinia Cup, a team event with two-boat teams consisting of a 52 and a Soto 40.

For all events except the Copa del Rey, the 52s—whether a TP52 or IRC52—will race boat-for-boat. “The  IRC52s will have to be within a TCC limit for this,” says Weiland. “That limit is set slightly above the TCC that a TP52 has in order to accommodate features such as carbon rigging, which under IRC carry a rating ‘penalty’.

“Just as we are experiencing at Quantum Key West Race Week, this will provide close and exciting racing,” adds Weiland. “Level rating, as such, is not a novelty, but the mix of level raters and box rule 52s is unique. For sure there is a lot to learn; we will start with an open mind and very few limits.”

At Copa del Rey, Weiland says the 52s will race under IRC. “That suits the event organization better and maximizes the number of boats on the start line. We hope to see well over ten teams competing in Palma.”

Weiland says the class will begin working with the clubs involved in the 2012 program immediately, while the organizational details are finalized for the management group. The 2013 calendar will be announced no later than August 2012. Plans for next year tentatively call for a return to the Americas early in the season.
Posted by the editor at 10:00 pm No comments: