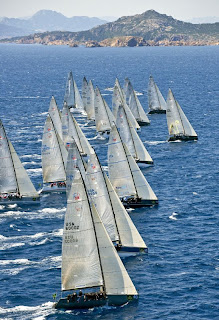 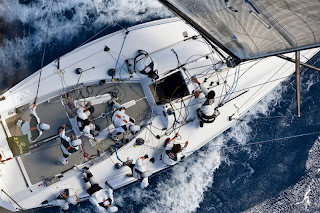 For the Farr 40 class its game on in the waters off Porto Cervo, Sardinia. Today saw day 1 of racing in a solid Mediterranean breeze and BARKING MAD achieving the best scorecard of 1-6-4 to sit 3 points ahead of MASCALZONE LATINO and JOE FLY who are tied for 2nd

Aussie Guido Belgiorno-Nettis sailing TRANSFUSION had a great first day with a 9-7-1 scorecard and is currently 5th in the rankings. 2008 Australian Olympic Laser representative Tom Slingsby is tactician and great to see he is mixing in some big boat sailing to further his experience.

Read the day one report here.
Posted by the editor at 5:44 am No comments:

Fathers, Sons and Daughters Aboard Flash For TRANSPAC '09

A few more boats pulled into Transpac Pier at Rainbow Harbor in Long Beach on Saturday. Some of them, including the Andrews 80, Alchemy and the TP52, Flash, used the windy Coastal Cup race from San Francisco to Catalina Island as a shake down cruise for the Transpac Race. Some boats ducked into Santa Cruz rather than brave the 30-knot winds, the rough ride and more carnage.

Tom Atkin's, Flash, and his crew weathered the bumpy ride south with some minor damage. Veteran Transpac navigator, Jay Crum, was among the Flash team. Crum set the double-handed Transpac record with Howard Gordon on Etranger and he played a major part in Bill Turpin's Alta Vita claiming the King Kalakaua Trophy for being first overall in the 2003 Transpac. Crum has sailed more than a dozen Transpacs. His son, Joe, will be sailing his second Transpac on the same boat as his father.

As they aired out sleeping bags and Med-tied Flash in front of Gladstone's and Club Transpac in Long Beach, Jay joked, "Last time it worked out well. He taught me a lot." The apple doesn't fall far from the tree and Joe, a full-time college student, is also an accomplished skiff sailor.

This father-son duo will be on opposite watches during the Transpac. Quipped Jay, "I sleep well knowing that Joe is on deck." Joe's summer vacation is aboard Flash. He has been helping to prepare the TP 52 for the Transpac and will be working the bow and the mast with Paul Allen.

Said Paul of Danny and Allie's Pacific Cup participation, "It was their first offshore experience. They loved it and it was neat for me to see how they changed over the nine days at sea." He continued, "Offshore Sailing has given me a lot, sense of self reliance, the belief that I will always find a way to survive and rebound from a bad moment. These are great character attributes for life and I wanted my kids to be exposed to that at a young age. Also, it is an adventure that we will share forever."

Generations of Transpac sailors will be sharing in Transpac '09 events that kick off on Friday, June 26th with the 4:00 pm Opening Ceremony at Club Transpac.

Follow the lead up to Transpac '09 at www.TranspacRace.com, the official website for the 2009 Transpacific Yacht Race. Become a fan on Facebook.
Posted by the editor at 5:17 am No comments:

Email ThisBlogThis!Share to TwitterShare to FacebookShare to Pinterest
Labels: Transpac

It seems to have been a long time coming, but the Mirsky Racing Team blasted through the final stages of the Troia Portugal Match Cup yesterday to take out the title 2-0 over ETNZ/BlackMatch Racing of New Zealand. After being picked by the top qualifier, Mathieu Richard of the French Match Racing Team for their semi final showdown, MRT came into the day with all guns blazing - taking the French team down in the first 2 races, and qualifying for the finals.

Adam Minoprio of ETNZ/BlackMatch Racing also qualified, taking down current World Champions Bahrain Team Pindar in the third and final race of their semi final series, giving MRT the final they had been hanging out for. "We have a great rivalry with Adam and his team" said Torvar, "and both our teams have wanted to race off in a Tour final for a while now, so it was really a dream come true to get to race them and take them down!"

Although the scorecard doesn't show it, the racing was incredibly tight, with both teams throwing everything they had at it. Thesecond race saw ETNZ/BlacMatch Racing come off the line with a slight advantage, but MRT maintained the starboard advantage, and managed to squeeze ahead at the first top mark with the kiwis snapping at their heels. "On the final downwind, we were making some big gains." said Dave Swete of ETNZ/BlackMatch Racing "we knew we didn't have enough to win it, but it was good fun to give the guys a scare."

This is the first World Match Racing Tour win for the young Aussies, but with Match Cup Sweden coming up next week in theirfavoured boats - the DS37's, it could be just the first of many.

Posted by the editor at 2:31 am No comments: