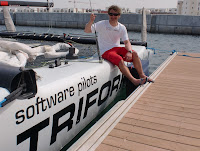 Read quotes from the sailing teams here.
Posted by the editor at 9:21 pm