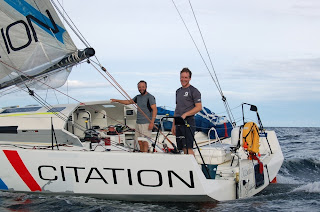 Having led the fleet into Cook Strait after the start in Wellington, Colman and Kuttel retook the lead in Leg 3 after four days of racing, overhauling Ross and Campbell Field onBuckley Systems 1,000 miles south-east of Wellington as the fleet encountered strong headwinds in the Roaring Forties. With the Kiwi father-and-son team on Buckley Systems returning to New Zealand with a serious injury to Ross Field’s back and the simultaneous decision to turn back made by Halvard Mabire and Miranda Merron onCampagne de France, Cessna Citation led the fleet east, crossing the mid-Pacific bluQube Scoring Gate eight days after taking pole position with a 125-mile lead over Marco Nannini and Hugo Ramon on Financial Crisis.
For the complete update, click here.
Posted by the editor at 7:16 am